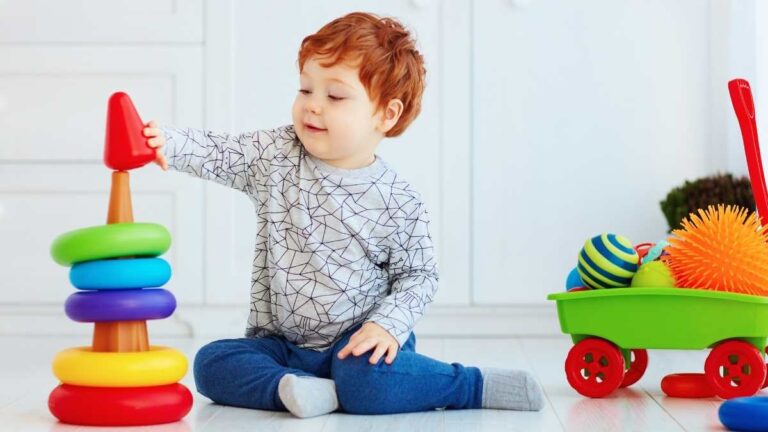 It might have started when your son threw his food off of their high chair. Or when he knocked over a block tower.

He discovered that the things he does could affect — indeed, a powerful one — the world around him.

This is the beginning of a lifetime of lessons. Here are a few cause-and-effect activities for toddlers that will pave the way for deeper lessons down the road.

Contents show
Blowing Bubbles
Playing With a Flashlight
Dynamics of Water
Indoor Lights Tour
To Spill or Not to Spill
Tower of Empty Cups
Deeper Lessons
Use of The Words Please and Thank You
Whether or Not
Highchair Hijinx
The Most Important Cause and Effect Lesson of All: Consistency
Related Posts:

What happened when you touched the bubble?

Playing With a Flashlight

In a dim room, a flashlight is a powerful thing. Your son can learn the dramatic difference made by such a simple act: the flick of a switch. Or the effect that comes from turning a flashlight on and off rapidly.

What happens when you swing the light around? When you hold it still?

Each visit to the tub is a chance to learn cause and effect. You might need to be willing to lay down an extra towel or two on the floor in front of the tub.

Water especially can teach that for every action; there is an equal and opposite reaction. Gentle actions create gentle effects, whereas wild, forceful actions create forceful effects.

While carrying your son from room to room, pause next to each light switch before turning it on and off. Besides cause and effect, this is a chance to teach your son some basic vocabulary, such as:

To Spill or Not to Spill

You might be able to curb some of your son’s tendencies towards mischief at the dinner table by having some playtime with a simple cup of water on a surface that can handle or contain spills.

Experiment with how different amounts of water make bigger or smaller messes. If you’re using a tray, you can even tilt the tray to move the water around the surface.

We’ve all see the stack of cups that 4 cups across at the bottom, then a layer of three, then two, then one.

This exercise will show your son instances of how a little force can have a big effect. Push one of the cups so that the tower collapses and act surprised. (Oh my, I’ve knocked it over!) Get your son to imitate your actions, striking the structure from different angles to see the different little ways that the cups collapse.

You can also perform this exercise with building blocks if you’re so inclined.

Do not underestimate the intelligence of toddlers. They have a rudimentary understanding of how to manipulate their parents to get their way. They will quickly catch on to the larger applications of cause and effect.

Use of The Words Please and Thank You

Plenty of parents get through the learning curve of Please and Thank You by constantly using the phrase “Now, what do we say?”

But this doesn’t encourage your son to think. It just triggers programmed behavior. If you’ve been going through the “What do we say?” routine for a long time, then you could experiment with pretending that you didn’t hear the demand. “I want a juice box!” can be toyed around with, unlike, say, “I need a bandaid!”

If your son is big enough to put his toys away, it’s only a matter of time before he starts pushing the limits of how much disobedience you will tolerate. If he has an outdoor toy such as a bike, he might begin balking at the notion of putting the toy away after every playtime session.

Go ahead and let your son see what happens when the toy is left out in the elements, whether it leads to rust, mold, or just an unpleasantly wet seat.

You might find yourself feeding your toddler in their highchair when it becomes clear that they would rather toss the bowl of food over the edge than eating it. The little one chucks the food as soon as you set it down and repeats the cycle with fits of giggling.

This a prime opportunity for a cause-and-effect lesson. When junior throws the bowl for the fourth time or so, when you get the next bowl, just set it aside long enough for the child to notice that the next sacrificial bowl isn’t coming straight away.

After a few minutes, offer the bowl. If it gets tossed over the side, hold on to the next bowl again for a few minutes longer before offering it. Most children will eventually connect that the more they play with their food, the longer it takes for the next serving to get within reach.

The Most Important Cause and Effect Lesson of All: Consistency

More than that, your son needs to see that the same disobedience always brings the same results. If it becomes a game of the law of averages (If I misbehave five times, there’s a chance that I’ll get away with it twice), then your son will get the notion that it’s just a contest of wills and will play the odds.